Ranchi the capital city of Jharkhand State in India is expanding both vertical and horizontal resulting in lots of problem.
by
Dr. Nitish Priyadarshi 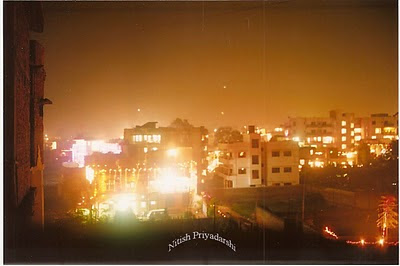 As more and more people leave villages and farms to live in cities, urban growth results. Urbanization occurs naturally from individual and corporate efforts to reduce time and expense in commuting and transportation while improving opportunities for jobs, education, housing, and transportation. Living in cities permits individuals and families to take advantage of the opportunities of proximity, diversity, and marketplace competition.
People move into cities to seek economic opportunities. In rural areas, often on small family farms, it is difficult to improve one's standard of living beyond basic sustenance. Farm living is dependent on unpredictable environmental conditions, and in times of drought, flood or pestilence, survival becomes extremely problematic.
Cities, in contrast, are known to be places where money, services and wealth are centralized. Cities are where fortunes are made and where social mobility is possible. Businesses, which generate jobs and capital, are usually located in urban areas. Whether the source is trade or tourism, it is also through the cities that foreign money flows into a country. It is easy to see why someone living on a farm might wish to take their chance moving to the city and trying to make enough money to send back home to their struggling family.
There are better basic services as well as other specialist services that aren't found in rural areas. There are more job opportunities and a greater variety of jobs. Health is another major factor. People, especially the elderly are often forced to move to cities where there are doctors and hospitals that can cater for their health needs. Other factors include a greater variety of entertainment (restaurants, movie theaters, theme parks, etc) and a better quality of education, namely universities. Due to their high populations, urban areas can also have much more diverse social communities allowing others to find people like them when they might not be able to in rural areas.

Clearly, urban settlements differ greatly in size, as mentioned by their populations. Is there a Theoretical maximum and an optimum size? Criffith Taylor and others believe that the ultimate size may be fixed by the increasing difficulty of obtaining enough water to supply unduly large numbers concentrated in a small area, while Lewis Mumford and similar authors think that the continued growth of very large cities not only produces more administrative problems than benefits. This also paralyses rather than furthers social relationships and phenomenally raises central land values, so much that land ceases to be adaptable to new needs.

Views on the optimum size of a city have altered with the march of history. Plato believed that most desirable size was 5,000, a figure which would allow everybody to hear the voice of an orator and so participate in active political life and develop varied social relations. Late nineteenth – century garden city enthusiasts in Britain thought that towns of 30,000 to 50,000 would be large enough supply all necessary human needs, whether medical, educational, social, economic or cultural.

Towns could not come into being until the surrounding countryside was capable of providing a food surplus in the past. Due to modern transport and large surpluses in many parts of the world, towns generally have little difficulty in obtaining food, even from far distant lands. Developing countries may lack the capital to give all their town folk an adequate diet, and even in developed countries there are sporadic temporary shortages, owing to failures in economic planning, poor harvests, dock strikes and traffic hold-ups occasioned by excessive rain, snow, floods, droughts etc.

The problem of water supply is more permanent and applies specifically to cities. It is becoming increasingly serious even in advanced countries which certainly have no problem in paying for the water they consume. The root of the problem lies in the fact that 98% of the earth’s surface water is contained in the salt oceans and in ice-caps. The remainder is unevenly distributed and often polluted. Over half is needed for agriculture, about a third for industry, 10 percent for domestic use.

Many cities, especially in developing countries, lack a clean supply of fresh water. In India, e.g., less than a third of the urban population has access to pure water, and the main reason why water borne diseases are rampant. Even when people are provided with purified water for drinking, they usually wash themselves and their clothing in contaminated supplies.

The demands made on water by urban industries, power stations and homes are growing at a more rapid rate than the growth of population. Many wells do not yield enough water, river pollution, like Ganga, Damodar etc. in India, is a continuing evil, and the remaining water resources- mostly in thinly populated highland areas of abundant rain- are far from many consuming centres.

After being separated from Bihar, Jharkhand state of India is now fast growing in terms of business. Ranchi the capital city is expanding both vertical and horizontal resulting in lots of problem like irregular electric supply, water supply, ground water depletion, air pollution, noise pollution, municipal waste disposal, failure of drainage systems, traffic jams etc. Surface waters are being contaminated. Seasonal diseases have also multiplied. More and more people are concentrating in the city flats which has raised the land values many fold. Ranchi earlier known as the summer capital has now become the heat furnace during summer. It is all due to the unplanned expansion of the city.

The urban heat island has become a growing concern and is increasing over the years. The urban heat island is formed when industrial and urban areas are developed and heat becomes more abundant. In rural areas, a large part of the incoming solar energy is used to evaporate water from vegetation and soil. In cities, where less vegetation and exposed soil exists, the majority of the sun’s energy is absorbed by urban structures and asphalt. Hence, during warm daylight hours, less evaporative cooling in cities allows surface temperatures to rise higher than in rural areas. Additional city heat is given off by vehicles and factories, as well as by industrial and domestic heating and cooling units. This effect causes the city to become 2 to 10 degree F (1 to 6 degree C) warmer than surrounding landscapes. Impacts also include reducing soil moisture and intensification of carbon dioxide emissions.
Owing to population growth, poor levels of hygiene, and increasing urban poverty, the urban environment in many developing countries is rapidly deteriorating. Densely packed housing in shanty towns or slums and inadequate drinking-water supplies, garbage collection services, and surface-water drainage systems combine to create favourable habitats for the proliferation of vectors and reservoirs of communicable diseases. As a consequence, vector-borne diseases such as malaria, lymphatic filariasis and dengue are becoming major public health problems associated with rapid urbanization in many tropical countries

Another change that has occurred after the oil crisis of 1973 is the vertical growth of large cities. People who were living in suburbs found it costly to travel to the city. The open spaces within the city got filled up by the construction of high rise buildings. Large bungalows and old residences were demolished and high rise buildings have come up both as commercial complexes and as residential flats. Many rich families are migrating from the suburbs to flats or apartments near the city centre. The vertical expansion of cities poses further problems in water supply, sewage disposal and traffic congestion on the roads. Traffic causes urban noise, air pollution, stress and strain in an individual.