These weathering occurred along the joints of granite gneiss rocks.
by
Dr. Nitish Priyadarshi.
geologist
nitish.priyadarshi@gmail.com 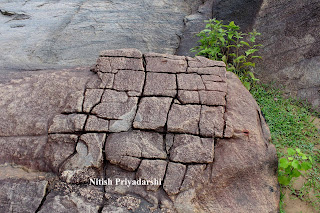 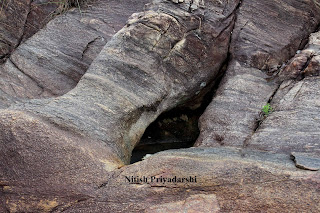 This site is located in Panchgagh falls some 35 kms from Ranchi. Geomorphology of this area shows that its landscape is undulating; intersected with numerous streams and river.
Weathering causes the disintegration of rock near the surface of the earth. Plant and animal life, atmosphere and water are the major causes of weathering. Weathering breaks down and loosens the surface minerals of rock so they can be transported away by agents of erosion such as water, wind and ice. Differential weathering occurs when some parts of a rock weather at different rates than others.
Posted by Environment and Geology at 1:25 PM No comments:

This coral is from the Port Blair, the capital of the Andaman and .
by
Dr. Nitish Priyadarshi
Geologist,
Ranchi.
nitish.priyadarshi@gmail.com 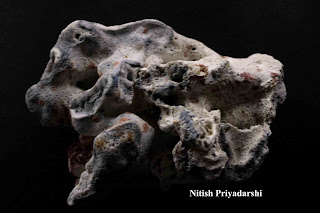 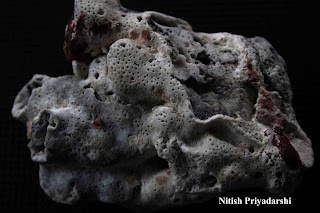 Andaman and is home to some of the most spectacular species of marine life in the world. With over 560 different species of corals recorded until date, the sheer colour and diversity of the sights underwater can leave you spellbound.

The coastal belt surrounding these islands is the abode of one of the richest coral reef ecosystems in the world. The distinction is that here the coral reefs and underwater formations are untouched by human activities.

Officially, Lakshdweep is often cited as ‘The Coral capital of ’ but Andaman and also boast of beautiful corals all in and around the group of islands. Of all the islands and beaches that offer you spectacular views of the corals,  stands tall of all. It is said to have the loveliest corals in whole of Andamans.

There are essentially four types of coral reefs: Fringing Reefs, Atolls, Patch Reefs and Barrier Reefs. Fringing and barrier reefs tend to grow near the coastlines of islands and continents and are usually separated from land by a lagoon or shallow sea. Atolls occur when the coral reefs form a ring around the lagoon and often form around the mouth of an underwater volcano while patch reefs are more isolated reefs and rarely reach the surface of the water. Reefs tend to grow slowly and it can take an estimated 30 million years for an atoll to form.
Most of the coral reefs in are of the fringing type but the are coral atolls.

Corals are marine invertebrates in the class Anthozoa of phylum Cnidaria. The group includes the important reef builders that inhabit tropical oceans and secrete calcium carbonate to form a hard skeleton.

Corals are major contributors to the physical structure of the coral reefs that develop in tropical and subtropical waters, such as the enormous Great Barrier Reef off the coast of , .

Although corals first appeared in the Cambrian period, some 542 million years ago, fossils are extremely rare until the Ordovician period, 100 million years later, when rugose and tabulate corals became widespread.

Coral reefs are the lifeline of the oceans. They are home to a wide variety of plants and animals and their health signifies the well-being of the entire marine ecosystem.
Coral reefs are known for some of the highest levels of gross productivity on earth. Coral polyps provide much of the energy to other communities in the marine ecosystem. The corals also harbour algae which process sunlight to fuel deriving nutrients from the polyp’s waste. Reef building corals and certain calcareous algae lay down the foundation of calcium carbonate. The massive structures built over generations are home to a wide array of plants and animals.

Coral reefs thus represent millions of years of growth and many of them could be the oldest living communities. The preferred places of coral reefs are shallow waters between the Tropic of Capricorn and Tropic of Cancer.

Coral reefs are under stress around the world. In particular, coral mining, agricultural and urban runoff, pollution (organic and inorganic), overfishing, blast fishing, disease, and the digging of canals and access into islands and bays are localized threats to coral ecosystems. Broader threats are sea temperature rise, sea level rise and pH changes from ocean acidification, all associated with green house gas emissions. In 1998, 16% of the world's reefs died as a result of increased water temperature.

Water temperature changes of more than 1–2 °C (1.8–3.6 °F) or salinity changes can kill some species of coral. Many governments now prohibit removal of coral from reefs, and inform coastal residents about reef protection and ecology. While local action such as habitat restoration and herbivore protection can reduce local damage, the longer-term threats of acidification, temperature change and sea-level rise remain a challenge.
Posted by Environment and Geology at 12:40 PM No comments: