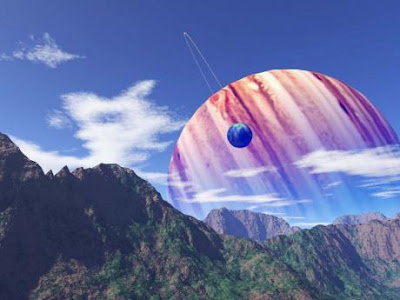 Twinkle, twinkle little star, goes the nursery rhyme, but what scientists are really wanting to find is planet’s similar to our earth.

When scientists confirmed in October that they had detected the first rocky planet outside our solar system, it advanced the longtime quest to find an Earth-like planet hospitable to life.

We know that earth is a pretty rare planet in our universe. Only a relative handful of planets are rocky and even fewer are in the habitable zones of their stars. At the same time, there is still a lot that we don't know about our universe outside the solar system.
The challenge in finding earth-like planets is the sheer distances involved. It involves light years even between our sun and the nearest star. We can currently observe stars and other galaxies, but it is even more difficult to find a planet. The first challenge is that planets are often much smaller than the stars they orbit. The earth is one millionth the size of the sun. The second challenge is that planets don't emit or reflect much light. With these two conditions using ordinary astronomy tools to find planets is impossible

Many scientists speculate that our galaxy could be full of places like Pandora from the movie "Avatar" -- Earth-like worlds in solar systems besides our own.

That doesn't mean such worlds have been easy to find, however. Of the 400-plus planets so far discovered, none could support life as we know it on Earth.
"The problem with finding Earth-like planets," "is that their host stars can emit 10 million times more infrared light than the planet itself. And because planets like ours are small and orbit very close to their respective stars, it makes Earths almost impossible to see."

The rocky planet CoRoT-7 b was discovered circling a star some 480 light years from Earth. It is, however, a forbidding place and unlikely to harbor life. That's because it is so close to its star that temperatures might be above 4,000 degrees F (2,200 C) on the surface lit by its star and as low as minus 350 F (minus 210 C) on its dark side.

GJ 1214 b is an extrasolar super-Earth discovered in December 2009 orbiting the star GJ 1214, at a distance of 13 parsecs or approximately 40 light-years from earth, in the constellation Ophiuchus. It is the second exoplanet (after COROT-7b) discovered to have an established mass and radius less than those of the gas giants in the Solar System, and is the first of a new class of planets with small size and relatively low density. It is also the first super-Earth around which an atmosphere has been found. The planet is believed to be too hot to sustain Earth-type life, but could consist of 75 per cent water.
The planet is also significant because of its proximity to Earth, and because it transits a small parent star, which should allow its atmosphere to be studied using current technologies. 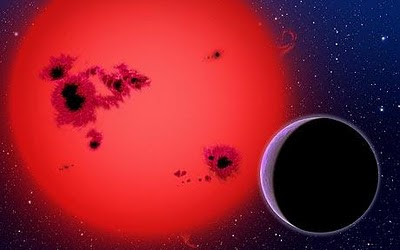 Recently I was going through an article published in Scientific American (August issue) written by Dimitar D. Sasselov and Diana Valencia. Article is about the planets which could be similar to our earth. From last several years we are searching such planets in outer space which can support life. But we are still groping in darkness. Many claims have been made earlier but science needs evidence to accept such claims.

One such claim was in the year 2007, when some Swiss astronomers were studying a star close to the brightest star in the constellation of Libra, a red dwarf called Gliese 581, when they noticed that it was wobbling. They were intrigued by this as they understood that there must be something massive though invisible fairly near it exerting a gravitational pull on it. The result of this was the discovery of a large planet, which they called Gliese 581-B. It was obviously too close to its star, subject to too much radiation and just far too hot for it to support any form of life. Then in 2007 the same team of astronomers noticed a second wobble in the star’s movement, which implied the existence of a smaller planet further out. This was the cause of great excitement: the first earth-like planet outside the solar system had been discovered. It is twenty light-years away from the earth.

Imagine yourself grazing at the sky on a summer night. You look in the direction of a particular star that, you have heard, has a special planet orbiting around it. Although you cannot actually see the planet- you can barely see the star itself- you know it is several times larger than earth and, like earth, is made mostly of rock, quakes sometimes shake its surface, much of which is covered by oceans. Its atmosphere is not too different from the one we breathe, and its sky is swept by frequent storms and often darkened by the ash of volacanoes. But most of all, you know that scientists think it could harbor life – and that they plan to seek evidence for it.

This scenario could become reality within the next decades. Although most of the 450- odd extrasolar planets found so far are giants more similar to Jupiter, astronomers are beginning to discover some that may not be two different from earth. And NASA’s Kepler probe, a planet hunter sent aloft last year, will discover many more.

Of course, these worlds are light-years away, so even our most advanced instruments cannot actually see the details of their surfaces- the mountains, the clouds, the volcanoes- and perhaps never will. Usually all our telescopes can do is detect indirect signs of a planet’s presence and help us estimate its mass and how wide its orbit is. In some cases, they can also give information about a planet’s diameter and perhaps a few other details. In the case of the giant exoplanets, these details may include estimates about the atmosphere composition and wind dynamics.

That is a far cry from being able to measure anything specific about geology, chemistry or other features. Yet from those few numbers, researches can deduce surprisingly complex portraits of the far-off planets, using theoretical modeling, computer simulations and even laboratory experiments, combined with established knowledge of earth and other planets of the solar system.

Finding a planet that harbors life may have to wait until astronomers are better able to detect rocky planets that are farther from their stars. Spotting true Earth-sized planets is challenging with current technology, but the presence of super-Earths suggests finding a world like ours is just a matter of time, researchers say.

Posted by Environment and Geology at 4:15 PM