Climate change will force millions of people to migrate.

People may be forced from their homes in numbers never seen before.
by
Dr. Nitish Priyadarshi 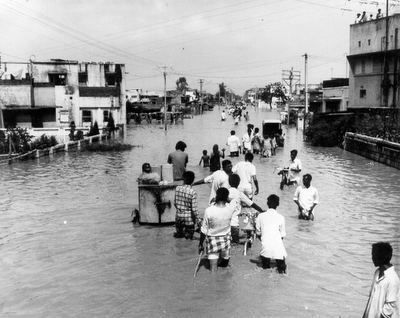 Change is the only constant in the history of the earth. Since its creation around four billion years ago, our home planet has constantly been subjected to changes brought about by the interplay of internal of forces and external influences. The enormous lithospheric plates are continually shifting, reshaping the continents. Volcanic eruptions and earthquakes are the visible results of this process. Seen from the perspective of the history of the earth, our planet, as we know it today, is merely a snapshot in time. Everything is in a state of flux. Everything- including the climate- is locked in a continuous process of change, giving rise to favourable and unfavourable conditions to which all life on earth-human, plant and animal- must constantly adopt.

After more than 170 million years of being dominated by the dinosaurs, the continental ecosystems saw the triumphant advance of mammals. It is highly probable that the widespread deaths of the dinosaurs at the end of the Cretaceous period were triggered off by the impact of huge meteorite which resulted in considerable climatic changes. The last 2.6 million years in the history of the earth – the Quaternary Period- were marked by great natural climatic fluctuations.

The last ice age ended 10,000 years ago. The great ice caps above North America and Europe receded, the land masses started to rise, the sea level rose too. Since that time the average temperature on the earth has increased by about four to five degrees Celsius.

Climate is changing. We are entering an era marked by rapid changes in climate brought on by man-made greenhouse gas emissions. Shifts in rainfall patterns and shore line will contribute to mass migrations on a scale never seen before. Since the beginning of record time, climate forced migration have reshaped civilization.

A billion people - one in seven people on Earth today - could be forced to leave their homes over the next 50 years as the effects of climate change worsen an already serious migration crisis, a new report from Christian Aid predicts.

The report, which is based on latest UN population and climate change figures, says conflict, large-scale development projects and widespread environmental deterioration will combine to make life unsupportable for hundreds of millions of people, mostly in the Sahara belt, south Asia and the Middle East.


Anticipated changes include higher rainfall variability, greater frequency of extreme events (such as droughts and floods), sea level rise, ocean acidification, and long term shifts in temperature and precipitation any of which can profoundly disrupt the ecosystems that supply our basic needs. In our more densely settled world, people may be forced from their homes in numbers never seen before.

Most attention has centered on the plight of low-lying islands states threatened by rising sea levels. Under certain scenarios, many of the world’s 38 small island states could disappear by the end of this century. Yet the problem faced by the inhabitants of these states is just the tip of atoll. In India alone, 40 million people would be displaced by a one-meter sea level rise. Shifts in the seasonality of river flows (as winter snowpack declines and glaciers shrink) would affect the agricultural livelihoods of several hundred million rural Asians, as well as the food supplies of an equal number of Asian urbanities.

A study commissioned by Greenpeace India, a not-for-profit organization, on climate change discloses that rising sea levels could force about 75 million people from low-lying Bangladesh and another 50 million from India’s densely populated coastal regions to migrate to interior towns and cities. This may generate severe tensions and instability in the context of already dwindling urban resources.

A one-meter sea level rise will inundate 6000 square kilometers in India, of which Mumbai, Kolkata and Chennai will be the major cities being affected. This would mean losses of billions of dollars in infrastructural, social, physical assets and capital.

125 million people are likely to migrate in the coming century of which 75 million will be from Bangladesh. The people from Bangladesh will most likely migrate to India in addition to our own 50 to 60 million people who will be displaced due to sea-level rise, shrinking water sources in the densely populated coastal regions of India.

The meteorological impact of climate change can be divided into two distinct drivers of migration; climate processes such as sea-level rise, salinisation of agricultural land, desertification and growing water scarcity, and climate events such as flooding, storms and glacial lake outburst floods. But non-climate drivers, such as government policy, population growth and community-level resilience to natural disaster, are also important. All contribute to more vulnerable people living in more marginal areas.

A rise in global temperatures due to greenhouse gas emissions could leave India facing a rush of 125 million people migrating into or within the country.


The frequency of natural disasters has increased by 42 percent since the 1980s, and the percentage of those that are climate related has risen from 50 to 82 percent. The United Nations office for the Coordination of Humanitarian Affairs and the Internal Displacement Monitoring Center estimates that in 2008, climate- related calamities drove 20 million people from their homes- more than four times the number displaced by violent conflict.

Climate change, at a conservative estimate will increase the number of environmental refugees six fold over the next fifty years: from 25 million to 150 million. How will climate change create refugees?

As the planet warms, food and water grow scarcer. In 1998, the Hadley Centre for Climate Prediction and Research forecast major decreases in the crop yields 2050. These would above all affect the tropical countries of South America, Russia and Western Africa. As for water scarcity, the Hadley Centre forecasts that by 2050, about 170 million people will suffer severe stress: their country will be using over 40 per cent of their water resources. Badly affected areas will include the US, North Africa, Europe, Turkey, India, the Gulf States and China. Global Warming may also endanger the monsoon, with effects much greater than those of drought alone particularly in India given that 70 per cent of India’s rainfall comes from the monsoon. Indeed, the Asian Pacific region as a whole, which has half the world’s population, likewise depends on the monsoon.

In China, at present, the government estimates that 30 million people are already being displaced by climate change. Some authorities set the figures higher, at up to 72 million. A one –metre rise of sea level would flood all of Shanghai, plus 96 per cent of the province around it. The population of Shanghai is over twelve million; by 2030, it is expected to be 27 million. Egypt would lose 12-15 per cent of its arable land, creating 14 million refugees.

Rising sea levels also threaten delta areas-such as the Mekong in Vietnam, the Yangtze in China, the Irrawaddy in Myanmar, the Tigris-Euphrates in Iraq, the Indus in Pakistan, the Sunderbans delta in India and Bangladesh, the Orinoco in Venezuela and the Amazon in Brazil- that hold more than one billion people (two billion by 2050)

Most of the refugees to Europe are expected to come from the sub-Saharan nations- the source of half of the world’s current total of refugees and states that are projected to suffer severe impacts from climate change.

Every year thousands of poor people from the Jharkhand and its adjoining states in India migrate to mega cities of India like Mumbai, Kolkata and Delhi and even to Punjab and North East States. Cause behind this migration, other than poverty, is lack of sufficient rainfall and drought like condition in the states from the last several years.

Although the civil war is behind the migration, a new crisis is now afflicting African country Mozambique. In 2000, 2001 and 2007 disastrous floods in the Zambezi and Limpopo river basins displaced hundreds of thousands of people. The floods of 2007 alone displaced more than 100,000 people, half of whom were evacuated to temporary “accommodation centers.”

Sometimes both droughts and storms can hit in the same year. In July 2001, for example, Honduras suffered a drought that affected a quarter of a million people. A few months later a tropical storm flooded the country side. Many farmers have already found their livelihoods too precarious and moved north; the great majority of migrants to the U.S. come from poor and rural areas in Mexico and Central America. Soil depletion, deforestation and unemployment are among the factors that drive migration.

1. The city of Sana’a, Yemen’s capital, has seen its population doubling every six years on an average since 1972 but the major water supply of the city is falling by 6 metres every year. Sana’a is only one of several cities across the world that face such impending crisis.

2. Desertification owing to deforestation and lesser rains is threatening human settlements and agricultural lands in various parts of the world. China, India, Morocco, Tunisia and Libya are potential victims.

3. Agricultural lands are turning saline and are being eroded in places like Egypt and Turkey, respectively.

4. In the US, while Louisiana is losing land area to erosion caused by sea, Alaska is threatened by sea tides that are increasingly intruding further inland each year.

5. Cyclones render millions in places like Bangladesh every year.

6. Low-lying Pacific island state like Tuvalu is under great threat by the rising sea level. The country has entered an agreement with New Zealand to give shelter to accept its 11,600 citizens in the event of it being swallowed by the sea.

Across Africa desertification and a consequent decline in agricultural output is displacing increasingly large amounts of people. An estimated 10 million people within Africa have been forced to migrate over the last two decades due to desertification or environmental degradation.

In 1995, half of Bhola Island in Bangladesh became permanently flooded, leaving 500,000 people homeless. The Bhola Islanders have been described as some of the world's first climate refugees. In 2007, a Bangladeshi scientist stated: "We're already seeing hundreds of thousands of climate refugees moving into slums in Dhaka." These refugees were fleeing flooded coastal areas.

The inhabitants of the Carteret Islands in Papua New Guinea are also among the first climate refugees due to sea level rise attributed to global warming and climate change. Other inhabitants of low lying islands and Island States are also at risk. Tuvalu, Kiribati and the Maldives are especially susceptible to changes in sea level and storm surges.

In Alaska, the village of Shishmaref, located on the 100 km long barrier island of Sarichef, also faces evacuation as rising temperatures cause the melting of sea ice and the thawing of the permafrost.


Despite hundreds of articles and many books about climate change, few discuss the issue of environmental refugees and its impact.

http://www.indiawaterportal.org/node/6478
Posted by Environment and Geology at 10:07 AM

You have shared with us the ill fate that will follow if we continue to abuse the environment. It is about time we considered the effects of our actions on the environment. I came across a blog (http://bit.ly/gW7zoy) that may interest you as it discusses global warming.

Thanks Pratik for the comments and information of a blog.