Impact of climate change on livelihood of the community in Pakur district, India.

Vulnerability assessment of the Pakur District of Jharkhand State in relation to climate change and its relevance to livelihood of the community and families.

Small slide show on impact of climate change in Pakur.


Agriculture production has reduced due to less or erratic rainfall. 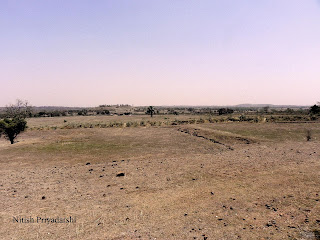 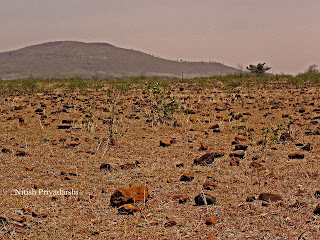 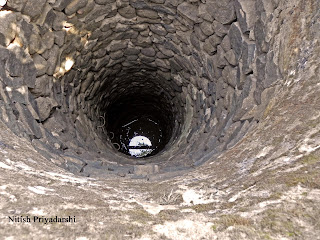 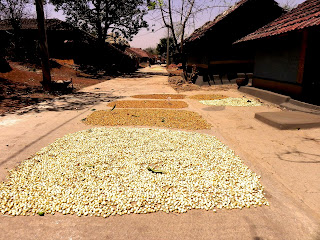 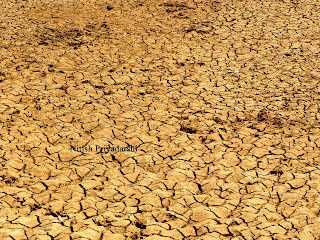 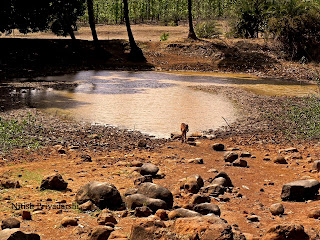 Scarcity of water in local ponds.

Climate change is a major challenge for agriculture, food security and rural livelihoods for billions of people including the poor. Agriculture is the sector most vulnerable to climate change due to its high dependence on climate and weather and because people involved in agriculture tend to be poorer compared with urban residents.

The climate change is already making impact on the lives of the population particularly the poor. It is already evident in number of ways. Consistent warming trends and more frequent and intense extreme weather events such as droughts, cyclones, floods, and hailstorms have been observed across India. The lives of the poor are punctuated by the risks and vulnerabilities that come with an uncertain climate.

Many believe agriculture is the most susceptible sector to climate change. This is attributed to the fact that climate change affects the two most important direct agricultural production inputs, precipitation and temperature. Climate change also indirectly affects agriculture by influencing emergence and distribution of crop pests and livestock diseases, exacerbating the frequency and distribution of adverse weather conditions, reducing water supplies and irrigation; and enhancing severity of soil erosion.

This study aims to answer questions: what is the trend of climate change in Pankur district, what is the impact on livelihood, who is vulnerable to the impact and why.

Pakur, famous for stone and Beedi (Biri) making industry, is one of the important revenue-earning districts of newly created Jharkhand State. Its black stone chips have got Asiatic fame in constructional qualities.

This district, once known for its thick & extensive forests, is now bereft of much of its jungle wealth. The medicinal plants such as Sarpgandha, Raigami or Dhami, Kazwa, Chiryaita etc. are now almost extinct. There has been large-scale destruction of forests in the past few years. So the Subsistent agro based economy, which was earlier supplemented by forest and forest produce, has been badly affected.

There are few small rivers and nalas running across these villages. They are the only source of irrigation for the field and are only supply water for the domestic needs such as washing, bathing and watering animals. Some of the villages do have a small village forest, which supply fuel and fodder  and other forest produce to the villagers.

General situation in this area is very difficult. Means of communication are very rare, roads are in poor condition. In rainy season people walk on foot for miles to reach market for purchasing article required for the family daily needs. 86% of the population is Santals and Paharias, and 12% are schedule caste, and other backward classes. There are some families who belong to business community commonly known as Mahajan and they are the one who more or less controls the economy of the area.

The Santals live in maculated villages surrounded by their fragmental holdings. The land and other properties are inherited by the male offspring. They live in thatch roofed mud house in symmetric rows lined on the both sides of the village main streets.

Traditionally, occupations are more or less divided among the men and women. Men plough the fields, thatch the root, while women gather firewood, cook, clean house, and raise the children.

Primary data on impact and vulnerability were collected by using group interviews in the villages from April 4 to 6, 2013. The interview was conducted in all seven villages. Early morning time was found to be an appropriate time. Discussion was also done by the animators.

Field observation was conducted in all the villages and photograph was taken regarding water level status.

Relevant and available data were gathered from the office of a NGO Theodori Rural Development Project, Chandrapura, district Pakur.

The climate change is already making impact on the lives of the population of the area. It is already evident in number of ways. The frequently experienced climatic shocks are prolonged drought and delay in the onset of rainy season, erratic and low precipitation, and heavy and unseasonal rainfalls. The interviewed villagers perceived the overall increasing temperature and downward trend of precipitation.

Drought or delay in the onset of rain land becomes dry and difficult to plough. Lack of precipitation hinders seed cultivation and germination of cultivated seeds. According to the villagers of Sijua agriculture has been worst affected from last five years due to decreasing and erratic trend of rainfall. Many Sal trees died due to extensive heat. Agriculture practice is stopped from February to June due to water scarcity. Remaining water is left for the use of livestock only. During this period villagers are forced to migrate to neighbouring state West Bengal as a lobourers for their earnings. They also carry their children which affects their study.

Accuracy in crop production has reduced. Profit from agriculture has also reduced, said villagers of Balidih. Villagers blame mass deforestation for climate change in the area.

Size of the wheat grain has reduced and also matures earlier. Size of the Papaya has also reduced. Earlier size use to be bigger, said villagers of Pachaibera.

In the month of November 2012 when grains were ready for cutting heavy precipitation killed all the standing grains in the village of Majdiha.

A major source of income through Mahua ( Madhuca longifolia) tree has also reduced due to less production this year (2013). Mahua is considered sacred among the tribal people of the area because of the tree’s medicinal values. The flowers of the tree, which have a unique fragrance, are used to produce alcohol and provide livelihood to thousands of people. Villagers of Kalhajhur complained that insects and less rainfall are more destroying the plants. Previous years it was not so common.

Villagers of Darajmath complained that due to lack of sufficient rainfall and heat stroke, agricultural production has reduced drastically. To increase the production villagers have increased the use of fertilizers, which is also now affecting the quality of the soil.

Drought and delay in the onset of rain led to poor grass regeneration/ forage deficit, water shortage and heat stress on livestock, and consequently increased the mortality of livestock. Due to lack of food and water and decreasing grazing lands villagers either sold their livestock or they died. Situation was never worse like today, said many villagers.

With the available agricultural production data suggests climatic change has been frequently imposing challenge on their livelihood and consequently affecting the society’s socio-economic activity.

Soil erosion has also increased in the area visited due to erratic rainfall and increase runoff and less green cover.

All the interviewees reported the existence of repeated serious impacts on the society. They reported food deficits, educational hurdles (especially children), increased susceptibility to diseases and failure to fulfill financial requirements, and lack of agricultural input.

Few villagers suggested that women are more vulnerable to climate change. The vulnerability of women was explained from their confinement at home caring for children and family members, worry about feeding the family members and long distance travel to collect water and waiting long queues. In addition children are the other more vulnerable to the event. Vulnerability of children to climate crisis is apparent from long absence from school, prone to different diseases etc. Long distance travel to collect water with their mother is the main cause of delay or low class attendance.

Many people from the region say that the rains are coming over a shorter period and the duration of precipitation is becoming erratic. If there  used to be monsoon over 90 days earlier, now it is raining fewer days, but in much sharper, more powerful bursts and with increasingly unpredictable patterns. As a consequence, water run–off increases and is highly varied in its availability. Less is stored and seeps into the ground, impacting underground aquifers adversely. Most of the wells and handpumps remain dry for four months (March to June). It affects the amount of water that rivers, ponds and streams receive in post-monsoon months. Villagers of the Kalhajhur said that the average water level has depleted from 20 to 25 feet. Handpumps work only in rainy season and dug wells are the only source but only for time beings. Dug wells are not working properly, complained the villagers of Majdiha and Balidih. They also said that from last few years they are facing erratic and less rainfall which has reduced their agricultural production.
In village Balidih earlier one rivulet use to fed water to the whole village but this year flow of water in this rivulet has decreased.

Since it is mostly women who do domestic work and get water, the water crisis has meant that women need to walk much longer distances to bring water. Even those handpumps that have water take much more time to bring up water during summer, because the pressure needed is higher, so they could be pumping for an hour before the first drop of water appears out of a pump. Government and NGO’s sponsored digging of small ponds has happened but they are mostly dry from February to May.

There are indications that in recent years the dengue and malaria (brain malaria) fever has risen. Earlier in summer season mosquitoes were less but now the trend has changed. Jaundice was not reported earlier but now the cases have increased. It may be due to depletion of fresh water and drinking contaminated water. Typhoid, Kalajar, Dysentery, loose motion is also rampant among the villagers. Mumps has also increased. Wisdom teeth are coming in earlier age among the children. Villagers complain that longevity has also reduced. According to villagers of the Sijiua main cause of the early death is due to poverty and poor quality of food. One villager said in sarcastic way that many few people grows old here because they die in early age.

This study shows that the increasing trend of climate change and its impact on livelihood is exacerbating the vulnerability to different socio-economic activities of the villagers. The water deficit is more likely to continue to constrain livelihood activities, and consequently exacerbate societal vulnerability. On the other hand, the frequent rain delay, erratic precipitation, drought and unseasonal rainfall are also grave concern for the villagers in the study area.

I would like to thank Mr. N. Thomas Rajkumar, director, Holistic Child Development India and D. Kiran Babu of HCDI for all their support to carry out this research work. I would also like to express my deepest gratitude to Mr. S. N. Danial director TRDP, Pakur, Dinesh Murmu Asst director TRDP, Babulal Hansdak, Ashok Kumar Datta, Sulaman Hembrom and Rafiel Hansdak for their constructive comments and guidance and other supports through out my field work and stay in Chandrapura. I would also like to thank the driver Mr. Ujjal Mandal of TRDP who patiently took me to the field.
Posted by Environment and Geology at 12:08 PM