Geological evidences of ancient glaciation in Jharkhand State of India.


Permo-Carboniferous time, about 300 million years ago, was a period of great glaciation.
By
Dr. Nitish Priyadarshi
Geologist 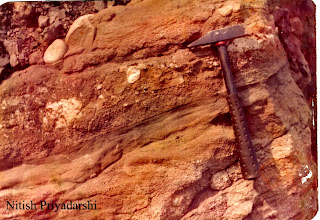 The Earth has a history of climate change. There have been ice ages and super-volcanoes and with them came evolutionary changes in many of the Earth’s inhabitants;


Permo-Carboniferous time, about 300 million years ago, was a period of great glaciation. The widespread distribution of Permo-Carboniferous glacial sediments in South America, Africa, Madagascar, Arabia, India, Antarctica and Australia was one of the major pieces of evidence for the theory of continental drift and led ultimately to the concept of a super-continent, Pangaea. Glacial activity spanned virtually the whole of Carboniferous and Early Permian time . Toward the end of the Carboniferous, around 290 million years ago, Gondwana, the southern part of Pangaea, was located near the south pole. Glacial centres expanded across the continents, producing glacial tillites and striations in pre-existing rocks.

The Late Carboniferous and Early Permian period was an exceptional phase in the earth’s history when the precursors of the modern continents were assembled in the form of two big landmasses (Gondwana and Laurasia) which were connected to form a supercontinent (Pangaea) such that the major part of the land area was in the southern hemisphere. Since the Earth’s climate is dependent on land and ocean distribution, the global air circulation and climate were radically different from the present. 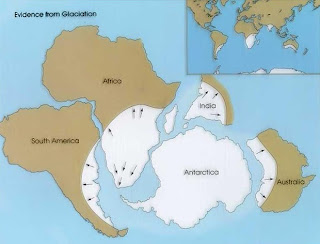 Past Glaciation evidence in Jharkhand State.

Rocks of glacial derivation are limited to the Talchir Formation at the base of Gondwana supergroup. The Talchir, all over Peninsular India comprises a variety of rock types including diamictite (tillite), conglomerate, sandstone, laminated varve-like shale-siltstone (rhythmite facies), and locally turbide deposits. The maximum known thickness is seldom in excess of 300 m.

The sediments comprising the Talchir Formation contain records of a chain of events caused by the climatic evolution during the Carboniferous–Permian boundary period in India. The occurrence of a boulder bed derived from a glacial moraine at the base of the Talchir Formation indicates presence of glacier ice near the basin periphery. Subsequent occurrence of sandstone–siltstone beds and their sedimentary features signify evolution of a large water body. Different research work suggests that the water of this basin was supplied by melting of the glacier. The glacier later retreated far from the lake margin when sediments were carried by melt-water streams.

This development marks a relatively rapid warming episode, which reached a climax when waves generated by intense storms created hummocky cross-stratification in the sedimentary layers. Several Gondwana basins in east-central India recorded this climatic transition in the basal part of their sedimentary sequence typified by the Talchir Formation. The warming initiated during late Talchir continued for a geologically long time with substantial melting of ice in various regions leading to increase in sea level as evidenced by signature of marine transgressions (at Umaria, Manendragarh and Daltonganj). This chain of events finally culminated in occurrence of widespread vegetation and swampy land, which formed the massive Permian coal deposits of eastern India.

Damodar Valley basin in Jharkhand State contains a chain of sub-basins containing a complete stratigraphic sequence of Talchir sediments(Ghosh and Mitra,1975). An excellent exposure occurs near the confluence of Dudhi Nala, Dube Nala, and Silai Nala about 0.5 km south of the village Jarwa  in the western part of the Bokaro sub-basin.

The East Bokaro coalfield ranks third amongst Indian coalfields in the respect of coal potentiality. The name of the Bokaro field was given by D.H. Williams in 1846-47 as the Bokaro river flows through the field for nearly 40 km.

The Talchir formation crops out only in the north-eastern periphery around Chapri. The Talchir formation has its base the typical tillite, which crops out in the nala (rivulet) south east of Lakarkatwatoli village. The tillite is practically unstratified and devoid of sandy interbands. It usually attains a thickness of 2m to 3m. the till favbric study in the Chapri area indicates that the inflow at the dawn of Gondwana sedimentation was from WNW to ESE. It is therefore evident that the Precambrian upland lying to the north of East Bokaro coalfield was the main gathering ground of ice.

Because of the restricted distribution of Talchir beds in the vicinity of Chapri it is surmised that only one major lobe of ice advanced into the eastern periphery of the coalfield.

The base of Gondwana sequence is marked by a thick pile of glacial and periglacial deposits of Talchir Formation. The Talchir beds are well exposed in the western part of the coalfield to the east and northwest of Mandu in Hazaribag district and also occur as a lenticular patch north of Tapin. The Talchir formation comprises diamictites, sandstones, shales, turbidites and rhythmites, which are all typified by a khaki green colour. This section lies at a distance of 68 km, from Ranchi. The area of study lies at a distance of nearly 3 km from Mandu, off the west side of the Dudhi bridge.

Characteristic features of glacial transport are observed in the forms of polished and striated boulders. Unsorted nature of the deposit also suggests their glacial origin.

The Talchir rocks are best developed in the northern part of the basin around the Barki Punu. A narrow strip of such rocks is also exposed all along the eastern periphery of the basin where good exposures are present in the Bhera river near famous Rajrappa temple.

Till fabric analysis of the basal tillites in the Barki Punu area has indicates glacial transport from WNW to ESE which is compatible with ice flow directions from equivalent horizons in the adjoining Karanpura and Bokaro basins (Ghosh and Mitra,1975).

The North Karanpura coalfield which is the western most member in the east-west chain of the Damodar valley basins forms a large expanse of coal bearing sediments spread over Hazaribag, Ranchi and Palamau districts.
Talchir formation is exposed along the fringes of the basin in the north, east and south. Tillite which is dumped type deposit comprises out sized clasts, which vary in size from a few centimeters to a few meters.

The different occurrences of the tillites indicate that they were laid down by different lobes of valley glaciers as abalation till or lodgment till rather than by a continuous ice sheet (De, !980).

Glacial pavements with undisputed glacial striae indicating ice transport from north and NW has been reported from the north of Pakri Barwadih at the northern margin of the basin ( Chakraborty and Bhattacharya, 1973).

The Talchir formation in Auranga basin has a maximum thickness of 30 m to 35 m. It is evident the ice had moved from the southern uplands and deposited the morainic material in bedrock depression. From the distribution pattern and their facies organization, it can be concluded that several lobes of ice had reached this basin and deposited glacial and fluvioglacial sediments in the bedrock depressions.

The Hutar coalfield is the westernmost of the Damodar-Koel valley Gondwana basins. It is one of the four coal bearing areas in Palamau district of Jharkhand.

The Talchir sediments in this area exposed along the northern, south eastern and southern boundaries of the Hutar basin and they crop out as narrow strips. Good exposure of Talchir rocks are observed in the section of nalas (rivulets) like the Saphi nala near Unkamanr, the Deori nala west of Barwadih and near Paisartanr, the Baheradhora nala, the Thongwa nala, tributaries of the Saphi nala around Nawadih, the Jamtipani nala and its tributaries and a tributary of the Jharna nala.

An analysis of till fabric, primary directional structures and lithofacial distribution indicates that the direction of glacial transport was mostly towards  north and north-east. Though no sub-surface information is available, total thickness of the Talchir formation is estimated to exist 50 m.

Extensive exposures of Talchir rocks are noted all along the southern margin of Jainti basin. The formation also covers a large area along the northern boundary of the Saharjuri and Kundit Kuraiah basins. In addition, more detached outliers of sediments have been recorded in the vicinity of Makranda, Alaura, Alakbera, Darabandh, Satuabad and Burhai. These occurrences of Talchir outliers testify to widespread glaciation in the Deoghar area, the detached outliers being erosional remnants.

Coal Resources of Bihar, 1987.  in Bulletins of the Geological Survey of India, Vol IV (part -1).

Posted by Environment and Geology at 12:21 PM