Why vegetarian animals are fat?


Theory begins some 50 million years back. 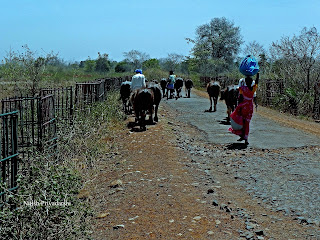 Why did some prehistoric animals get so big in the first place? No one knows for sure, but there are lots of theories. One theory begins some 50 million years back.

The past 50 million years appear to have been a time of progressive deterioration. On every vegetated continent, grasses and small hard leaves widened their domain. While certain herbivores accommodated to the new foliage- and evolved the art of eating coarse, fibrous fodder-other species, committed to Eocene and Oligocene ways, died. In many animals, from horses and zebras to rodents, from antelopes to kangaroos, from giraffes to camels, from elephants to pigs, the main food-processing part of the jaw, the cheek teeth, became larger in over-all height and riddled with complex slicing edges. An increase in tooth height, called hypsodonty (high tooth) is typical of animals that harvest greenery close to the ground-mainly fibrous grasses in open territory which is generally poor in nutritional value.

Any animal committed to such a diet must eat an enormous quantity. This requires both a large gut and a large body capable of handling masses of grass and other fibrous plants. Long –distance travel allowed access to such volumes of vegetation, mowed and chewed as the animal walked along. After the Eocene, many lineages of animals evolved to a large size, formed social herds, and modified their limb bones in ways that allowed wide and rapid movements over open terrain.

The other theory says being larger can provide many evolutionary advantages—bigger animals are less vulnerable to predators and can compete more assertively for resources. The existence of bigger herbivores also means that carnivorous animals have to grow in order to be effective hunters. A species' size may also shift in response to environmental factors. In cold climates, a bulky frame can be an asset to warm-blooded animals—the bigger they are, the better they retain heat. The opposite is true for cold-blooded animals—in a warm climate, a bigger mass can help insulate an animal and keep it from overheating. Scientists suggest that some plant-eating dinosaurs and other animals might have gotten so big because the foliage in that era was extremely tough and woody: A larger body frame meant a longer digestive tract and more time for bacteria to do its work, allowing the dinosaur to extract as much nutritional value as possible from each bite.

Posted by Environment and Geology at 12:35 PM

Email ThisBlogThis!Share to TwitterShare to FacebookShare to Pinterest
Labels: Why did some prehistoric animals get so big, Why vegetarian animals are fat?