Soils on the hills of granite gneiss near Ranchi also support medicinal plants and flowers.

They are Orchid, Zingiber purpureum and Asparagus racemosus.
By 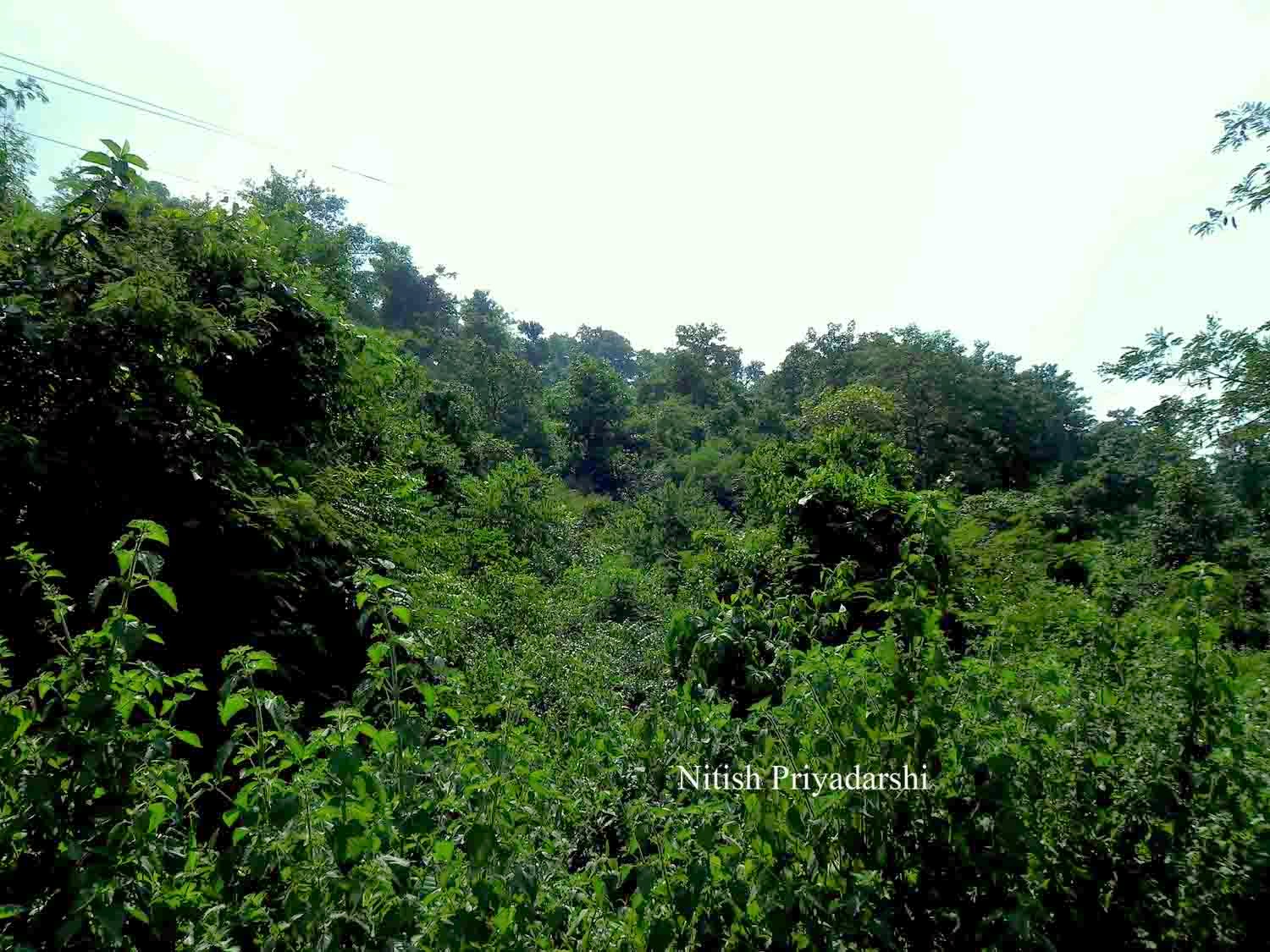 Hill near Bundu on Ranchi-Jamshedpur road.

Medicinal plants have been identified and used throughout human history. Plants have the ability to synthesize a wide variety of chemical compounds that are used to perform important biological functions, and to defend against attack from predators such as insects, fungi and herbivorous mammals. At least 12,000 such compounds have been isolated so far; a number estimated to be less than 10% of the total.

The use of herbs to treat disease is almost universal among non-industrialized societies, and is often more affordable than purchasing expensive modern pharmaceuticals. The World Health Organization (WHO) estimates that 80 percent of the population of some Asian and African countries presently use herbal medicine for some aspect of primary health care.

A large amount of archaeological evidence exists which indicates that humans were using medicinal plants during the Paleolithic, approximately 60,000 years ago. (Furthermore, other non-human primates are also known to ingest medicinal plants to treat illness) Plant samples gathered from prehistoric burial sites are an example of the evidence supporting the claim that Paleolithic peoples had knowledge of herbal medicine.

Medicinal plant materials derived from the same species can show significant differences in quality when cultivated at different sites, owing to the influence of soil, climate and other factors. These differences may relate to physical appearance or to variations in their constituents, the biosynthesis of which may be affected by extrinsic environmental conditions, including ecological and geographical variables, and should be taken into consideration. They grow in wild also depending upon the soil and rock types. Soils cover over the granite gneiss or schist rocks supports some rare and common medicinal plants and flowers depending upon the presence of nutrients in soil derived from parent rocks.

Chotanagpur plateau is one of the oldest landmasses on earth. It is composed of Precambrian rocks which are more than 540 million years old. It is a collective name for the Ranchi, Hazaribagh, and Koderma plateaus. Of these, Ranchi is the largest.

During my recent field work near Ranchi city of Jharkhand State on the hills composed of granite gneiss rocks I came to know that such hills supports medicinal plants also. Hills are covered with soils supporting thick forest. Regionally the area is a part of Chotanagpur Gneissic Complex of Eastern Indian Peninsular Shied.

Intensive weathering under tropical humid climate of the granite gneiss rocks has helped in rather quick formation of soils which support forests. Plants extract minerals from the soil formed by mineral rich rocks.

Zingiber purpureum contains the true gingers, plants grown the world over for their medicinal and culinary value. Zingiber purpureum grow in tropical Asia, from India to Indonesia. Zingiber is commonly found in moist, partially shaded evergreen and monsoon forests on soils rich in organic matter, but also in secondary forests, open habitats at forest edges, disturbed sites and bamboo thickets on rocky soils at altitudes up to 3000 m. The rhizomes of zingiber are valued for their aroma and taste. The odour has been described as strong and reminiscent of a mixture of ginger, camphor and turmeric, the taste as hot and camphorous. Zingiber is used throughout tropical Asia for medicinal purposes, primarily as a carminative and stimulant for the stomach, and against diarrhoea and colic. Its effective in fever, headache, cough, stomach aches, colds, constipation, jaundice, Parasitic Worms, rheumatic, medicinal herbs, obesity, minimize stomach after birth. Additionally,it has been shown to exhibit pesticidal and fungicidal activity. The rhizomes of zingiber contain essential oils including terpinen-4-ol, which has been found to be effective against a range of pathogenic bacteria including Escherichia coli, Klebsiella pneumoniae, Salmonella paratyphi, S. typhi and Shigella flexneri. 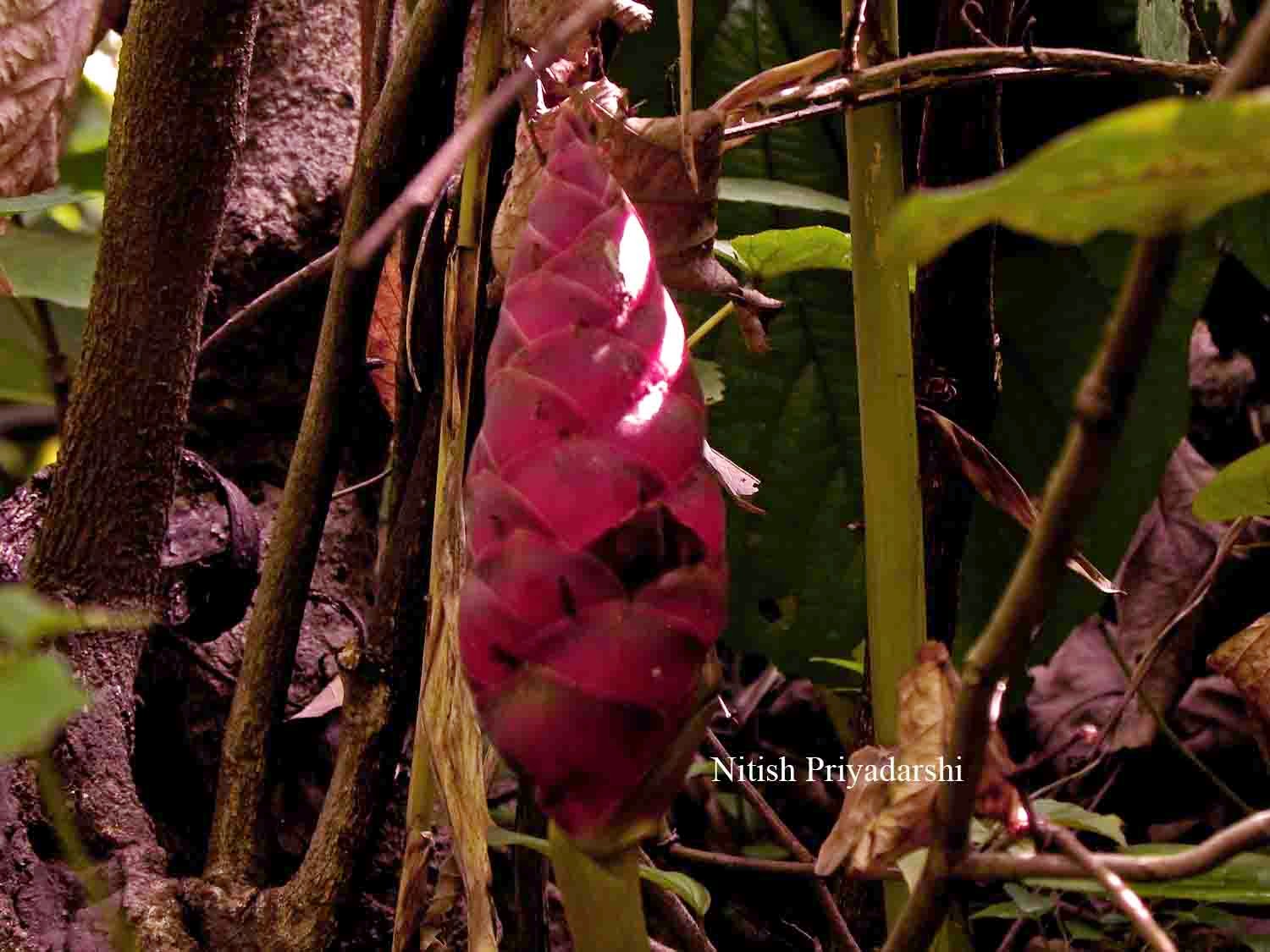 The other medicinal plant on the slopes was Asparagus racemosus.  Asparagus racemosus  (Satavar, Shatavari, or Shatamull) is a species of asparagus common throughout Sri Lanka, India and the Himalayas. It grows one to two metres tall and prefers to take root in gravelly, rocky soils high up in piedmont plains, at 1,300–1,400 metres elevation). It was botanically described in 1799. Due to its multiple uses, the demand for Asparagus racemosus is constantly on the rise. Due to destructive harvesting, combined with habitat destruction, and deforestation, the plant is now considered 'endangered' in its natural habitat.

Asparagus racemosus (Shatavari) is recommended in Ayurvedic texts for the prevention and treatment of gastric ulcers, dyspepsia and as a galactogogue. A. racemosus has also been used by some Ayurvedic practitioners for nervous disorders. 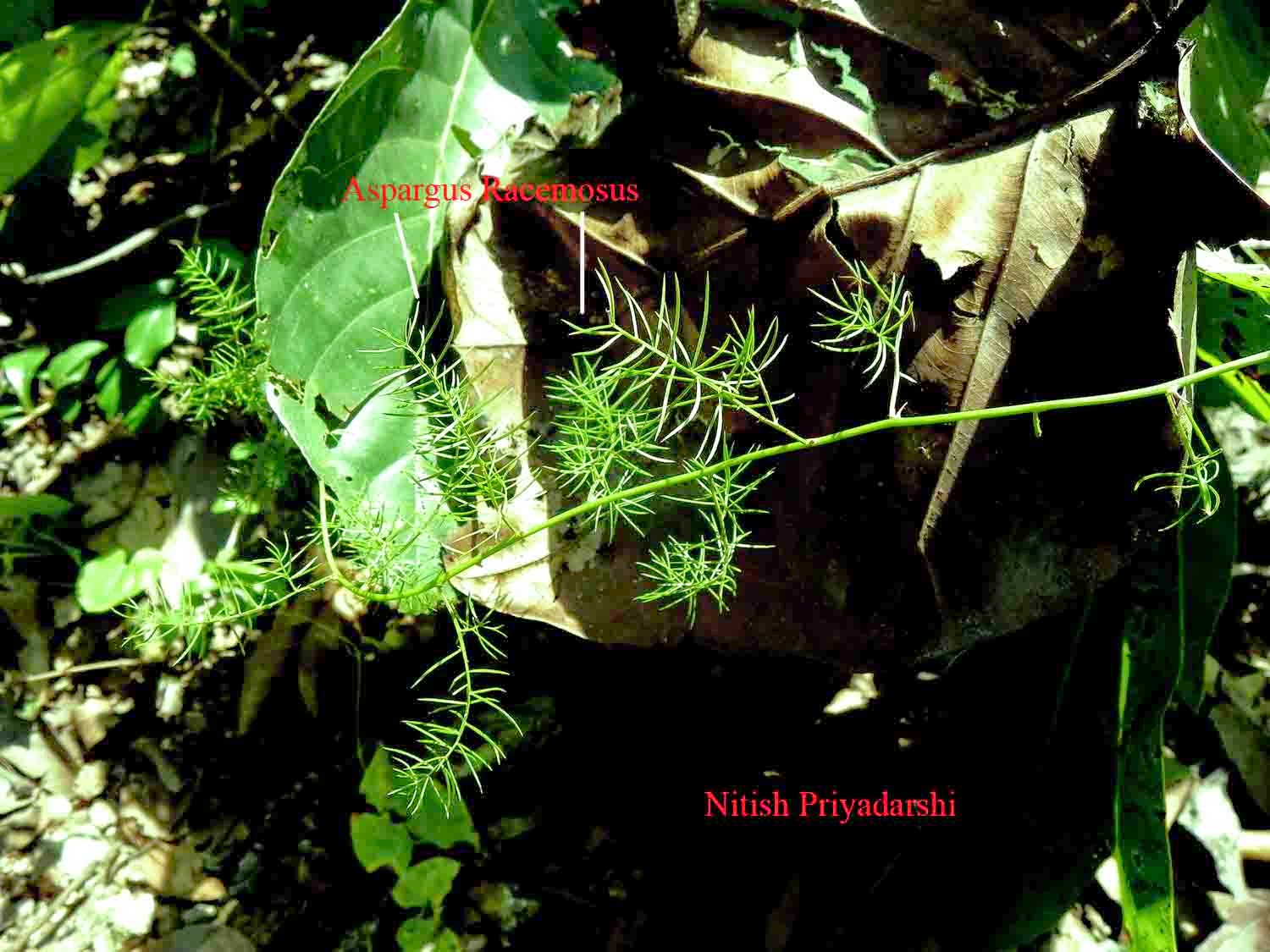 The orchids are a large family of flowering plants, the Orchidaceae. They are herbaceous monocots. With an estimated 25,000 different types existing naturally, orchids are of the largest flowering plant families, but they have always carried an impression of rarity.

There are between 22,000 and 26,000 species in 880 genera. They make up between 6–11% of all seed plants. Orchids can be found in almost every country in the world except for Antarctica.
People have grown orchids for a great number of years. They grow orchids for show, for science, or for food (for example, vanilla).

Different cultures throughout history have believed in the healing, disease-fighting and protective properties of the orchid. In traditional Chinese medicine the orchid is used to help cure coughs and lung illnesses. The ancient Greeks associated it with virility, and the Aztecs were said to drink a mixture of the vanilla orchid and chocolate to give them power and strength. 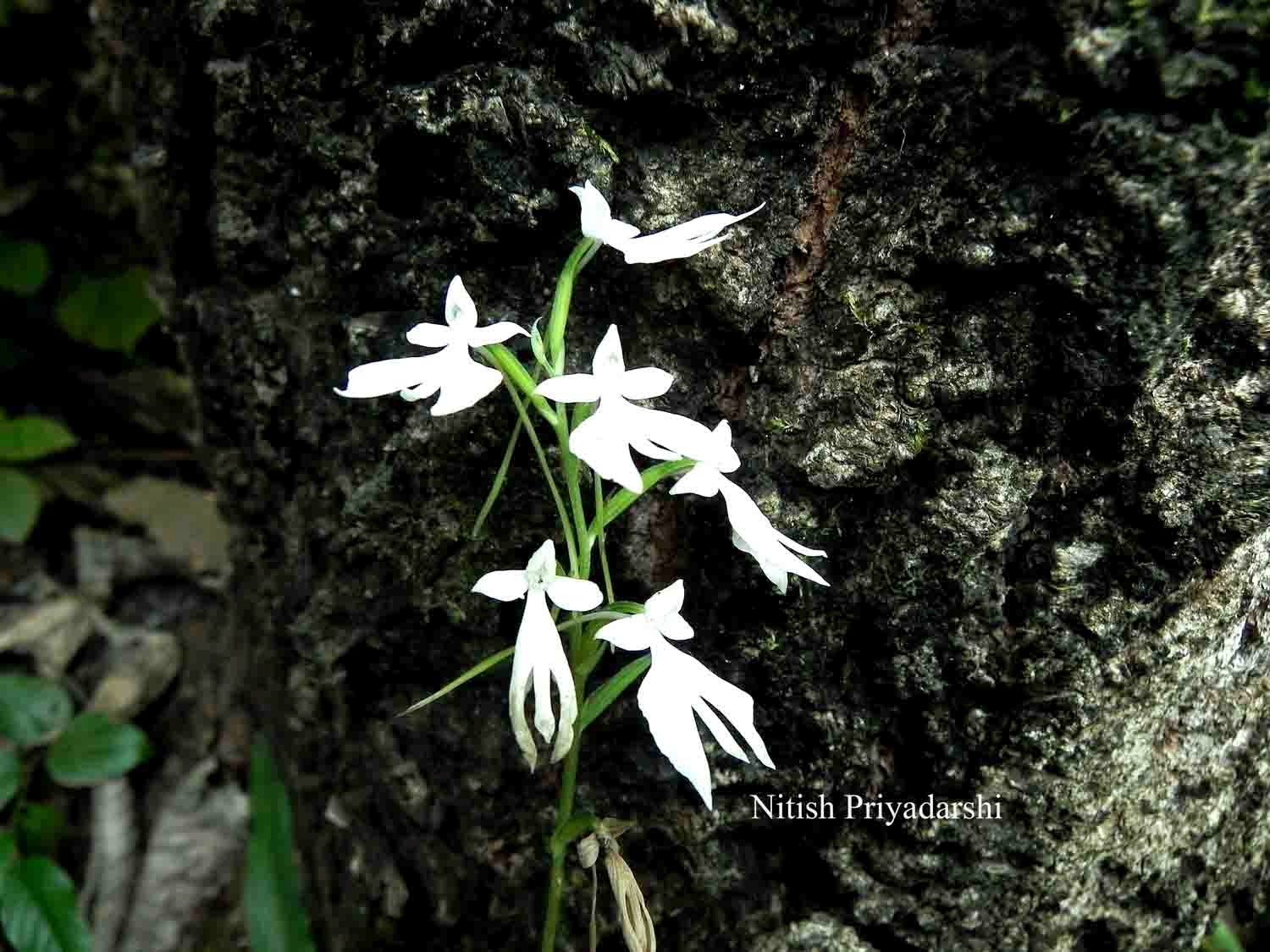 Source of minerals in soil :

Most of the material that makes up soil comes from rocks and minerals. These rocks and minerals are weathered in place or weathered and transported, and become unconsolidated material on the surface of the earth. This material is called regolith. The upper part of the regolith is soil.

Granite gneiss rocks around Ranchi consist of silica, aluminium, iron, manganese, magnesium, calcium, sodium, potassium and trace amount of phosphorus and barium. Among the above calcium, phosphorus, and potassium are known as macronutrients and others like manganese and iron are known as micronutrients used by plants. Sufficient amount of water is also found in such rocks which is the most essential for the plants growth.

In plants, silicon strengthens cell walls, improving plant strength, health, and productivity. Other benefits of silicon to plants include improved drought and frost resistance, decreased lodging potential and boosting the plant's natural pest and disease fighting systems. Silicon has also been shown to improve plant vigor and physiology by improving root mass and density, and increasing above ground plant biomass and crop yields. Iron is necessary for photosynthesis and is present as an enzyme cofactor in plants. Iron deficiency can result in interveinal chlorosis and necrosis. Iron is not a structural part of chlorophyll but very much essential for its synthesis. Manganese is necessary for photosynthesis, including the building of chloroplasts. Manganese deficiency may result in coloration abnormalities, such as discolored spots on the foliage. There have been reports that aluminium  may serve as fungicide against certain types of root rot.

Soil conditions on this hill can provide plants with adequate nutrition and do not require fertilizer for a complete life cycle.

The biodiversity of Jharkhand is under severe threat due to human induced activities, industries, mining, settlement, development projects and removal of forest products, overgrazing and forest fires. Majority of forest is lost due to industrialization and extraction of minerals from the earth crust. There is an urgent need to conserve the rich biodiversity of the state before the treasure is lost. There is an immediate need for the
in situ conservation of this special habitat,i.e., Chotanagpur Plateau on whole as well as its biodiversity. Being one of the oldest landmasses on earth, the Chotanagpur Plateau might be hiding some unforeseen information concerning the evolution of earth as well as its biodiversity.

A manual of the geology of India and Burma, vol.1, 1973. Geological Survey of India publication, Calcutta, India.

Posted by Environment and Geology at 3:39 PM