The Dark Side of Black Carbon
by
Dr. Nitish Priyadarshi 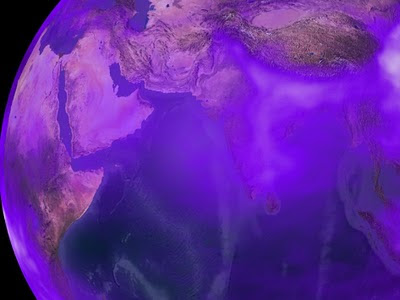 As interest in Earth's changing climate heats up, a tiny dark particle is stepping into the limelight: black carbon. Commonly known as soot, black carbon enters the air when fossil fuels and biofuels, such as coal, wood, and diesel are burned. Black carbon is found worldwide, but its presence and impact are particularly strong in Asia. Black carbon, a short-lived particle, is in perpetual motion across the globe. The Tibetan Plateau's high levels of black carbon likely impact the region's temperature, clouds and monsoon season.

Black soot deposited on Tibetan glaciers has contributed significantly to the retreat of the world's largest non-polar ice masses, according to new research by scientists from NASA and the Chinese Academy of Sciences. Soot absorbs incoming solar radiation and can speed glacial melting when deposited on snow in sufficient quantities.
Temperatures on the Tibetan Plateau -- sometimes called Earth's "third pole" -- have warmed by 0.3°C (0.5°F) per decade over the past 30 years, about twice the rate of observed global temperature increases. New field research and ongoing quantitative modeling suggests that soot's warming influence on Tibetan glaciers could rival that of greenhouse gases.

Since melt water from Tibetan glaciers replenishes many of Asia's major rivers -- including the Indus, Ganges, Yellow, and Brahmaputra -- such losses could have a profound impact on the billion people who rely on the rivers for fresh water. Areas going to most affected in India would be Uttrakhand, Uttar Pradesh, Bihar, Jharkhand, West Bengal and Assam. While rain and snow would still help replenish Asian rivers in the absence of glaciers, the change could hamper efforts to manage seasonal water resources by altering when fresh water supplies are available in areas already prone to water shortages.
Researchers led by Baiqing Xu of the Chinese Academy drilled and analyzed five ice cores from various locations across the Tibetan Plateau, looking for black carbon (a key component of soot) as well as organic carbon. The cores support the hypothesis that black soot amounts in the Himalayan glaciers correlate with black carbon emissions in Europe and South Asia.
Black carbon or BC is formed through the incomplete combustion of fossil fuel, biofuel, and biomass, and is emitted in both anthropogenic and naturally occurring soot. Black carbon warms the planet by absorbing heat in the atmosphere and by reducing albedo, the ability to reflect sunlight, when deposited on snow and ice. Black carbon stays in the atmosphere for only several days to weeks, whereas CO2 has an atmospheric lifetime of more than 100 years. The term black carbon is also used in soil sciences and geology, referring either to deposited atmospheric BC or to directly incorporated BC from vegetation fires. Especially for the tropics, BC in soils significantly contributes to fertility as it is able to adsorb important plant nutrients .

Black carbon is a potent climate forcing agent, estimated to be the second largest contributor to global warming after carbon dioxide (CO2). Because black carbon remains in the atmosphere only for a few weeks, reducing black carbon emissions may be the fastest means of slowing climate change in the near-term.

In some regions, such as the Himalayas, the impact of black carbon on melting snowpack and glaciers may be equal to that of CO2.Warmer air resulting from the presence of black carbon in South and East Asia over the Himalayas contributes to a warming of approximately 0.6°C. An “analysis of temperature trends on the Tibetan side of the Himalayas reveals warming in excess of 1°C.

Black carbon sources vary by region. For example, the majority of soot emissions in South Asia are due to biofuel cooking, whereas in East Asia, coal combustion for residential and industrial uses plays a larger role.

Black carbon can be controlled in developing countries through the implementation of cleaner fuels, new cooking technologies, and changing crop management practices.

This is very intersting and understandable, I going to send a couple of friends to see your blog. Thanks for the good work.